The Vouraikos gorge is located 13 kilometers northeast of Kalavrita in Achaia. It has a length of 20 kilometers and flows from the Vouraikos river from which it got its name.
The great interest in the Vouraikos gorge is the flora of the area since many rare endemic species have been recorded and are of special scientific value. Some of them are bellflowers of the rocks (Campanula rupestris), the wild cob (Stachys parolinii), the aurinia of Moria (Aurinia moreana), etc. The fauna of the area consists mainly of birds such as Golden Eagles, waterfowl, Petretes, and other birds that find refuge in the steep forested mountain masses that surround the gorge while in the remarkable foliage that can be found in the otter “Lutra Lutra”
The hike, to cross the gorge, takes 6 to 7 hours – depending on the physical condition of the hiker – while on the way you can encounter imposing slopes, rushing waterfalls, impressive caves, and rich alternating vegetation that compose a unique natural landscape. The hiking trail runs parallel to the railway line of the famous Cog Railway that connects Kalavrita with Diakofto and began construction in 1889, while it was inaugurated in 1896. The Cog Railway construction is due to the large slope of the route. Hikers have the opportunity to take the Cog Railway to the starting point of the hike and can enjoy its wonderful route.
The valley of Vouraikos was a lake that over time, waters found an outlet to the sea and from the friction formed this majestic gorge.
According to Greek mythology, the gorge took its name from Voura. Voura was the daughter of Eliki and Ionas whom Hercules loved. Legend has it that Hercules opened the gorge with his sword, cutting the rock in two so that he could reach the sea and meet Voura.
If you visit the gorge of Vouraikos do not miss to see up close ¨Moutzouri¨, the old locomotive that appears in the old railway station of Diakoptos square. 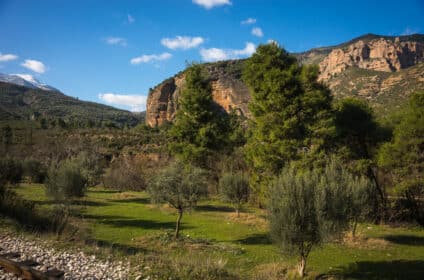 This website uses cookies to improve your experience while you navigate through the website. Out of these, the cookies that are categorized as necessary are stored on your browser as they are essential for the working of basic functionalities of the website. We also use third-party cookies that help us analyze and understand how you use this website. These cookies will be stored in your browser only with your consent. You also have the option to opt-out of these cookies. But opting out of some of these cookies may affect your browsing experience.
Necessary Always Enabled
Necessary cookies are absolutely essential for the website to function properly. These cookies ensure basic functionalities and security features of the website, anonymously.
Functional
Functional cookies help to perform certain functionalities like sharing the content of the website on social media platforms, collect feedbacks, and other third-party features.
Performance
Performance cookies are used to understand and analyze the key performance indexes of the website which helps in delivering a better user experience for the visitors.
Analytics
Analytical cookies are used to understand how visitors interact with the website. These cookies help provide information on metrics the number of visitors, bounce rate, traffic source, etc.
Advertisement
Advertisement cookies are used to provide visitors with relevant ads and marketing campaigns. These cookies track visitors across websites and collect information to provide customized ads.
Others
Other uncategorized cookies are those that are being analyzed and have not been classified into a category as yet.
SAVE & ACCEPT
Claim listing: Vouraikos Gorge