It is estimated that, circa 90 B.C., about 30,000 people lived on this small island, which is no more than a dot on the map of the Mediterranean. The names inscribed on the tombstones in the ancient cemetery provide us with evidence that during the 2nd c. B.C., apart from the island’s majority of Athenian and Roman residents, Delos was populated by folk from most Mediterranean cities: from the Peloponnese and Italy, from mainland regions, Central, Western Greece and Macedonia, Thrace, the Black Sea and Asia Minor, from the Aegean Islands, Cyprus, Crete, and faraway places including Troas, Mysia, Aiolis, Ionia, Lydia, Caria, Lycia, Bithynia, Paflagonia, Pontus, Cappadocia, Pisidia, Pamphilia, Cilicia, Syria, Media, Phoenicia, Palestine, Libya, Arabia and Egypt.

At this time, all these people, in spite of their varied nationalities and different historical and cultural backgrounds, managed to forge a peaceable society. They communicated with each other in spoken and written Greek, the inter-national language of the period, adopted the Greek lifestyle, lived in Greek-style houses and built Greek temples, where they freely worshiped the gods of their homelands. The islanders worked companionably and enjoyed community life, while their children played together, studied at same Gymnasium, and trained in the same Palaestrae.

Greeks, the antithesis of the zealous followers of monotheistic religions, were always willing to accept that their neighbour’s god was indeed a god, often one of their own gods with a different name. Apollo, although a little hesitant at first, soon did not object sharing his island birthplace with Sarapis, Isis, Harpocrates and Anubis, or the God of Israel, the Gods of the Arabs, Atargatis and Adad, the Gods of the Phoenicians and the Roman Gods. So, perhaps for the first time in human history, in this small corner of the earth almost all the Mediterranean peoples co-existed in harmony.

The ships, arriving continuously at the harbours of Delos, carried not only merchandise but also people, news and ideas from almost every Mediterranean city. The whole world seemed like a small neighbourhood ringing the sea that brought them together and brings us together. The Mediterranean Sea, where the mystic East and the active, progressive, West encounter the Greece of reason, balance and harmony, the place where reason and sentiment coexist harmonically and an exuberant love of life is balanced with a tempered submission to destiny.

Ephorate of Antiquities of the Prefecture of Cyclades

Tickets:
Full: €12, Reduced: €6
The ticket price to the archaeological site of Delos does not include the ferry ticket price from Myconos or any other island.

Source: http://odysseus.culture.gr
Ephorate of Antiquities of the Prefecture of Cyclades 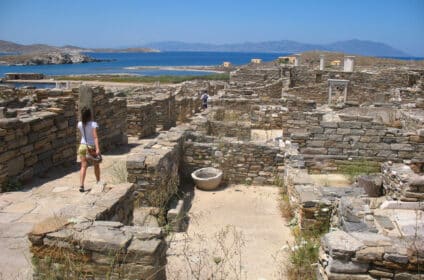 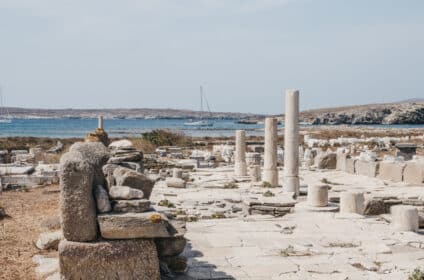 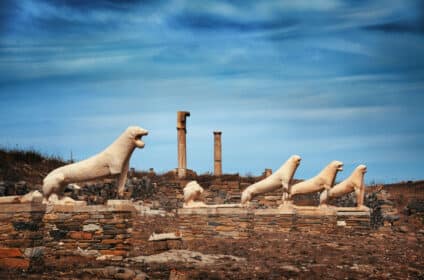 This website uses cookies to improve your experience while you navigate through the website. Out of these, the cookies that are categorized as necessary are stored on your browser as they are essential for the working of basic functionalities of the website. We also use third-party cookies that help us analyze and understand how you use this website. These cookies will be stored in your browser only with your consent. You also have the option to opt-out of these cookies. But opting out of some of these cookies may affect your browsing experience.
Necessary Always Enabled
Necessary cookies are absolutely essential for the website to function properly. These cookies ensure basic functionalities and security features of the website, anonymously.
Functional
Functional cookies help to perform certain functionalities like sharing the content of the website on social media platforms, collect feedbacks, and other third-party features.
Performance
Performance cookies are used to understand and analyze the key performance indexes of the website which helps in delivering a better user experience for the visitors.
Analytics
Analytical cookies are used to understand how visitors interact with the website. These cookies help provide information on metrics the number of visitors, bounce rate, traffic source, etc.
Advertisement
Advertisement cookies are used to provide visitors with relevant ads and marketing campaigns. These cookies track visitors across websites and collect information to provide customized ads.
Others
Other uncategorized cookies are those that are being analyzed and have not been classified into a category as yet.
SAVE & ACCEPT
Claim listing: Delos